In the not-self world, being a non-energy type is a deep handicap that has to be compensated with smartness. You have no muscle? Well then get yourself some brains. This is the evolutionary process of humanity anyway. The further you go in our past, the more muscle we needed to survive. Now we live in times where with a click we can remove things out of the way. We developed our brain, and projectors are here to take advantage of that cognitive development. They’re here to be suckers for information, because when they meet information that transforms them, that’s what they can offer it as awareness in return to others. The true potential of projectors lies in awareness, not in just accumulating information 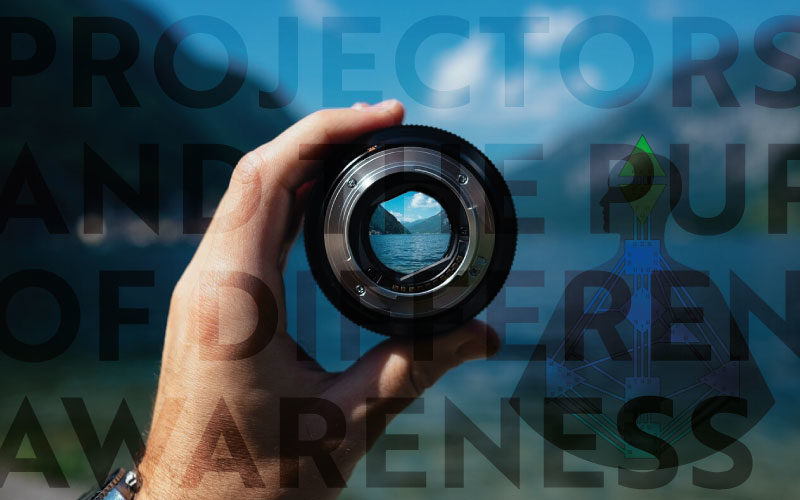 Presence can only be recognized or not. Presence can be met by others, because it’s just a simple state of being. It’s the natural state of being of an awoken personality. Awakening is the first step in becoming aware, self-aware. We know that Projectors are here to focus on the other, but it’s still them who want to know who that other is that is standing right in front of them. After all, in waiting for an invitation, the question that comes naturally when someone approaches you is: “Who are you, and what do you want from me?” That’s all. Presence.

Because it is an aspect of their nature that they are born with, Projectors have already taken in a lot of information in their lives, but it is information that has been taken in incorrectly, because it was absorbed with the conditioned mind of a ‘fake’ energy type that is trying to get on the top ten list of famous slaves in order to be recognized as a homogenized ‘Genius’. They may have developed all kinds of forms of awareness that are not rooted in their own natural gifts. They might have learned a lot of stuff that’s good for others, but never brings them closer to be recognized for who they really are by those others.

Projectors are not bitter because they don’t get any recognition, they actually get more social recognition than anybody else, but they’re always getting the wrong kind of recognition. They’re recognized for what they do for others, for their material contributions, for what they can give. They really need others, which is not necessarily a problem by itself. There is always more people around than we need, isn’t there? Don’t turn needing others in your life into a problem, because it is not; there are plenty of candidates around, wait and see. It’s the same thing as needing air to breath, you can turn that into a problem too, if you want, but the truth is you just need to wait for the right others. Which other is right for you, if you think you are what you are not, or if you feel bitter because you are not what you think you should be. It is the distortion of resentment in the frequency of your very life force that has turned your spirit bitter, because being recognized just for what they are is the only thing that ever mattered to them. Yet, most of them never managed to have that nature seen and recognized by others, and that keeps them expressing themselves in a way in which they to justify for not being always consistent in their energy and availability.

The Projector has this penetrating awareness within the mechanism of the way their aura operates in interaction with other auras. They are not here to penetrate others with ‘their’ energy. As a matter of fact, on an energy level it is them who are here to be penetrated by others, and feel the impact of the enveloping energy of any Generator coming into their aura. Feel the energy buzz that they bring and learn to let go of that buzz when it is ‘enough’. Feel the difference between auras and not necessarily hold on to any. That’s the one thing that’s really dangerous if you are designed to be an energetic ‘parasite’. You can’t allow yourself to be attached to your host. All you can be is a guest in their lives. You don’t have to eat everything that’s served because you are a guest. You don’t have to behave conventionally because you are treated as a guest that is unique. It’s always about how long you stay in that buzz.

Projectors are here to know who is feeling great and who is feeling bad without them having to say anything. And when they ask themselves: “Who are you?”, they already know so much because they are feeling the energy buzz, and they know the person is feeling down when they’re actually saying that they feel ok. If they are aware, they immediately know that this person is not in touch with themselves or simply does not know how to deal with their feelings more creatively. So, they wisely watch how the other person plays their Not-Self game in their life, knowing that wisdom is not something that comes ever easily for human beings. We all need to integrate the Not Self in our personality, because that’s how we stay connected to the material dimension of our lives. We don’t need to be possessed by it, but without a Not-Self we don’t know how to interpret what is happening in the material world that is around us. Our Not-Self is where we all eventually find our potential for wisdom.

Every human being is wounded in their spirit, because every human being has been subject to conditioning that created a division between their body and its intrinsic spirit, by imposing identification with the rational mind. The conditioning power of civilization had and continues to have a distorting impact on all of us, helpless and incompetent as all human beings are born. And Projectors are here to know where this wound comes, and how it can be healed in each of us, because they are designed to know the others beyond and despite of their appearances. That’s why it is so tremendously important that they follow their strategy, as it guarantees ‘one on one’ auric interaction. You invite me, it has nothing to do with anybody else. One on one. I invite you. Invitations are never for everybody, they are personal and either formal or not. Both can be nice, but they are very different. Invitations don’t come easily. Especially true invitations, which is an invitation that you can always reject by kindly saying: “No, thank you.”, and there’s no punishment or retaliation of any kind for not having accepted. If there’s punishment, then it wasn’t a true invitation, it was hiding a request or a demand that brings distortion to the spirit of the potential interaction.

The strength of a Projector is in the integrity of their spirit, but being strong in spirit in a world that is devoid of spirit, means they have to do hard psychological work on the inside, in order to guide the other through what has been spoiled and limits the understanding that they have of themselves. Projectors are designed to see and feel a lot of things, and yet keep their mouth shut and wait until somebody asks them something. When they do that, they are no longer perceived as a verbal gunslinger that just talks, but rather as someone who is aware and has something to say that is not homogenized. They are no longer someone who speaks only to indirectly release some anger, frustration or bitterness through their claims and complaints. When aware, Projectors does no longer speak for everybody; they communicate more effectively when they do it with one person at a time.

That’s what being a Projector means in everyday life, but it requires that you know who makes a difference for you in your life. Put your whole being and your mind in trying to understand the relationships you have with the people that make a difference in your life, because that’s how you can go deeper into knowing for yourself the way things work. That’s how you get to success, when you understand what it at the source of the suffering between you and the world around you. Projectors are here to transform our ideas and opinions about the true value of success, which is inherent in being recognized for who you really are. To be loved and appreciated as a being for no other pretension, just for what you are naturally, just another human being that’s perfectly ok with feeling helpless. Projectors are here to have very deep bonds with others, but not with everybody that is available. They’re here to be very open in their spirit, but they need to be very selective in the form because they are not equipped to handle the energy of everybody around them for a very long time without falling into exhaustion. They need to know which is the energy buzz that’s correct for them and in which amount, but it start with waiting for the invitation to interact. The invitation can come in many ways.

In the end, the awakening of the spirit is the recognition that life itself is an invitation – the only true invitation that is for everybody – and you know it’s a true invitation because you can turn it back by killing yourself at any moment. It’s an invitation and you can do whatever you want with it if you are ready to take the consequences. There are no rules, there are no limits other than in the conception of humanness that lies in our perspective, but there are no limits to awareness and to what it can do. We’re limited in the form, but human awareness can create its own unique and differentiated Illusion. That’s awareness; it’s our differentiated perception of the material ‘reality’ that we share with others. Projectors are here to live out the success of a differentiated Illusion that is not restraint by a homogenized sense of reality, a world of their own that mirrors the essence of their spirit. If anybody can transform the world it is Projectors, because they don’t actually need to first change the world on the outside, but they can create their own individual world with the people they share their life with on a daily basis. The people in their geometry who help them build their life, the social network of humanity through which their sense of Self allows them to feel connected to everything.